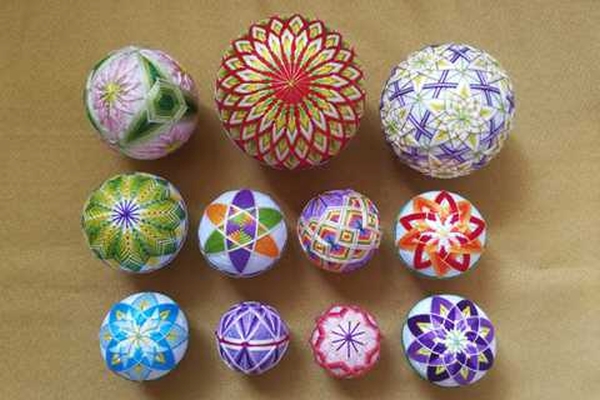 Temari (“hand ball” in Japanese) is a traditional folk art. The balls are decorated with intricate embroidery of seasonal flowers, geometric patterns and Japanese traditional motifs.

Balls came to Japan in the 6th century from China. They were made from deer skin and used only by high court lords in football games called Kemari.

Around the 10th century, court ladies of noble families began using the beautiful silk threads to carefully and lovingly wind them into decorative balls.

They competed with each other in making the most colourful, opulent and elaborate patterns. The balls were used in tossing games or as decorative pieces.

Temari was handed down from generation to generation, mother to daughter that is why sometimes it is called a “mother’s love ball”

It gradually spread and became popular also in regional towns where it developed its own techniques, beauty and local colour.

Temari is a highly valued and cherished gift, symbolizing deep friendship and loyalty, wishing the recipient a brilliant and happy life.

Temari workshops at Gojyuan are presented by Chihiro Kownacki.