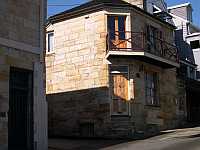 At No. 10 Darling Street, which is near the ferry terminal, you will see the old Shipwright's Arms Hotel which was built in 1844. It was called the Dolphin Hotel until 1846.

As you walk up the hill towards the village, you will pass Cahermore ( Fort on the Hill ) on your left which was built in 1841 and was the first bakery and the oldest pub called the Waterford Arms. 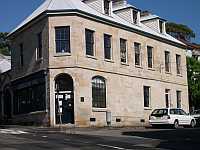 At No. 51 Darling Street is the old Oddfellows Hall built in 1846 which has a long history of community use.

Originally on the site was a timber cottage built in 1830 and in 1844 a stone shop was added. 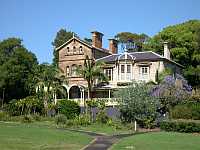 Overlooking Cameron's Cove and the lovely Ewenton Park featuring two large fig trees is Ewenton House which was built in 1872 and once owned by Ewen Wallace Cameron. 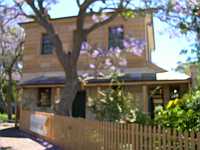 The Balmain Watch House was a police lockup from 1854 until 1925 and included a change room, constable's bedroom, one male cell and and one female cell ( half the size of the male cell).

Hampton Villa was built between 1847 and 1849 by Edward Hunt and was the residence of Sir Henry Parkes between 1888 and 1892 when he was Premier of NSW. 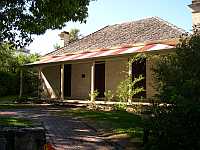 At No.4 Wallace Street, Balmain is Clontarf Cottage which was built in 1844. The cottage has been a home to live theatre in Sydney since the 1970s.